The Saturn SL3 is a bit of a legend. While there were a number of experiments/prototypes that Saturn made after the launch of the S-Series (the linked articles mention work having been done on a convertible model), the SL3 stands out by having been discussed in the media a bit, and considered its production for the 1994 model year, even going so far as to refer to it in a few places in the owners manual though it was never produced or sold. It featured the body of an SL2 with the front end of an SC2.

You can read more about the SL3 at the following links:

(Brief SL3 mention near the bottom of the article) 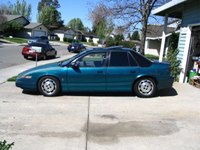